We are always very interested to find out more about why our residents decided to opt for Park Home Life over more traditional properties and each of our residents have their own reasons and decisions along the way.

We met recently with a couple that made the move to Park Home Life just over 3 years ago to find out more about their journey and how they are finding life at Blunsdon Abbey Park.  We met with them in their own property with magnificent views over the Abbey Ruins, which they absolutely adore especially with a glass of wine, in their garden when the weather is good. 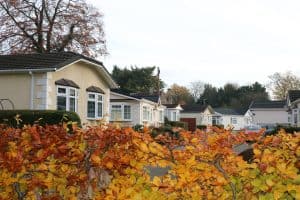 “This is the best thing we have ever done at this time of our life and with lots of friends… we met 16 new neighbours in the first week of moving here and 30 by the end of the first month” Christine was eager to share.

“it’s an instant community and we were amazed about the friendship and support shown to each other, it’s amazing” added Hugh.

The couple were keen to impart with us that the main reason they went for this way of living is that you “get a lot more for your money than in a bricks and mortar bungalow”.  Most of the bungalows they looked at before they purchased their park home needed a great deal of work internally and although they did look at a few they “just didn’t tick their boxes”.  Their main draw to Blunsdon Abbey was an over 50’s community with like-minded neighbours.

“6 or 7 years ago we came to have a look” although Christine did add say she had no idea what it was like.  Christine was keen to add that once she had viewed one of the homes she thought “wow I could really live here”.  “The way the park is laid out on all different levels gives the park so much character and when we downsized, we didn’t miss the space as we found that they house we lived in,  we were only using half of it anyway” Hugh added “we don’t have any regrets moving to the park, we have asked ourselves if we won the lottery would we move from Blunsdon, the answer is NO”.

Blunsdon Abbey was their first choice of park.  Hugh had visited quite a few parks whilst he was working although none had impressed him as much as Blunsdon Abbey.

Both Hugh and Christine have thrown themselves into the social side of the park and regularly attend events within the social hall on the park. “You can join in or not, its entirely up to you…, we have lots of friends that visit that are not quite at the right age and have already said that this way of living is on their list when they are old enough” Hugh shared.

All in all Hugh and Christine summed up their first three years extremely positively and have no regrets about moving to Blunsdon Abbey.  They added … “everyday we can’t believe how lucky we are and it’s a lovely place to live”